Guide Pour Your Heart Into It: How Starbucks Built a Company One Cup at a Time

Pour Your Heart Into It: How Starbucks Built a Company One Cup at a Time

EyesMalamJumat Seguir. Full Name Comment goes here. To my parents, I had attained the big prize: a diploma.

But I had no direction. No one ever helped me see the value in the knowledge I was gaining. I've often joked since then: If someone had provided me with direction and guidance, I really could have been somebody. It took years before I found my passion in life. Each step after that discovery was a quantum leap into something unknown, each move riskier than the last. But getting out of Brooklyn and earning a college degree gave me the courage to keep on dreaming. For years I hid the fact that I grew up in the Projects. I didn't lie about it, but I just didn't bring it up, for it wasn't much of a credential.

But however much I tried to deny them, those memories of my early experiences were imprinted indelibly in my mind I could never forget what it's like to be on the other side, afraid to look into the crystal ball. After it appeared, I received letters from Bayview and other blighted neighborhoods. Most came from mothers, trying to guide their kids, who said that my story gave them hope. The odds on my coming out of the environment in which I was raised and getting to where I am today are impossible to gauge.

How did it happen? 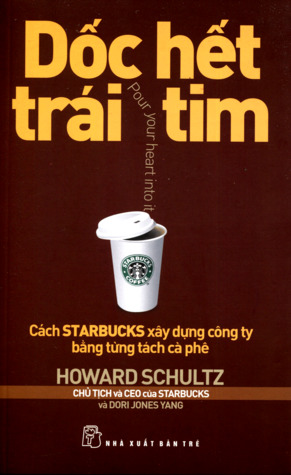 The sun shone on me, it's true, as my brother, Michael, always tells me. But my story is as much one of perseverance and drive as it is of talent and luck. I willed it to happen I took my life in my hands, learned from anyone I could, grabbed what opportunity I could, and molded my success step by step. Fear of failure drove me at first, but as I tackled each challenge, my anxiety was replaced by a growing sense of optimism. Once you overcome seemingly insurmountable obstacles, other hurdles become less daunting.

Most people can achieve beyond their dreams if they insist upon it.

Pour Your Heart Into It: How Starbucks Built a Company One Cup at a Time

I'd encourage everyone to dream big, lay your foundations well, absorb information like a sponge, and not be afraid to defy conventional wisdom. Just because it hasn't been done before doesn't mean you shouldn't try. I can't give you any secret recipe for success, any foolproof plan for making it in the world of business.

But my own experience suggests that it is possible to start from nothing and achieve even beyond your dreams. On a recent trip to New York I went back to Canarsie, to look around Bayview for the first time in nearly twenty years. It's not bad, really, except for the bullet hole in the entry door and the burn marks on the buzzer sheet. When I lived there, we didn't have iron gates on the windows, but then we didn't have air-conditioners either.

I saw a group of kids playing basketball, just as I used to, and watched a young mother pushing a stroller. A tiny boy looked up at me, and I wondered: Which of these kids will break out and achieve their dreams? I stopped by Canarsie High School, where the football team was practicing. In the warm autumn air, the blue uniforms and play calls brought the old exhilaration flooding back over me. I asked where the coach was. From the midst of the hefty backs and shoulder pads a small red-hooded figure emerged. To my surprise, I found myself face to face with Mike Camardese, a guy who had played on the team with me.

He brought me up to date on the team, telling me how the school finally got its own football field.

By coincidence, they were planning a ceremony that Saturday to name the field in honor of my old coach, Frank Morogiello. For the occasion, I decided to make a five-year commitment to help support the team.

Without the support of Coach Morogiello, where would I be today? Maybe my gift will allow some Canarsie athlete, driven as I was, to rise above his roots and achieve something no one could ever imagine. I've heard that some coaches face a curious dilemma. The world-class athletes on their teams--the players with the best skills and experience--sometimes falter when it comes to crunch time.

Occasionally, though, there's a player on the team, a blue-collar guy whose skills and training are not quite world-class.

Cooking Book Review: Pour Your Heart Into It: How Starbucks Built a Company One Cup at a Time by ...

Yet at crunch time, he's the one the coach sends out to the field. He's so driven and so hungry to win that he can outperform the top athletes when it really matters.

~>PDF Pour Your Heart Into It: How Starbucks Built a Company One Cup …

I can identify with that blue-collar athlete. I've always been driven and hungry, so at crunch time I get a spurt of adrenaline. Long after others have stopped to rest and recover, I'm still running, chasing after something nobody else could ever see.


Every experience prepares you for the next one. You just don't ever know what the next one is going to be. After graduating from college in , like a lot of kids, I didn't know what to do next. I wasn't ready to go back to New York, so I stayed in Michigan, working at a nearby ski lodge.

I had no mentor, no role model, no special teacher to help me sort out my options. So I took some time to think, but still no inspiration came. After a year, I went back to New York and got a job with Xerox, in the sales training program. I learned more there than in college about the worlds of work and business.

They trained me in sales, marketing, and presentation skills, and I walked out with a healthy sense of self-esteem. Xerox was a blue-chip pedigree company, and I got a lot of respect when I told others who my employer was. After completing the course, I spent six months making fifty cold calls a day.